Mosconi was key in Argentina's surveyance and exploitation of petroleum.  He led Yacimientos Petroliferos Fiscales (YPF) from its creation in 1922 through 1930.  He also created the distillery of La Plata which was the 10th largest in the world at the time.  Mosconi strengthened Argentina's position as an oil-producer through tight control of prices and shrewd business moves.  He also helped to develop Argentina's steel industry and realized the importance of linking it to the country's defense needs.  He led a national mobilization of military engineers.  In 1930 after a military coup, Mosconi was ousted from his positions.
Savio became his successor in Argentina's industrial progress.  He led the project to open the Escuela Superior Tecnica ("Higher Techinical School").  The first class started in 1934 and was open to all members of the armed services.  In 1936 he assumed the role as head of Fabricas Militares (FM) but realized it did not operate the way it should.  This led to the creation of Direccion General de Fabricaciones Militared (DGFM) on December 11, 1938.  The factory started in a small plant in Buenos Aires but moved to Rosario on October 3, 1942 in order to decentralize production.  The initial products were the Colt M1911 .45 pistol, the Mauser rifle and carbine in 7.65mm and several submachine guns.  The factory later made the FAL rifles in 7.62 x 51mm, HI-Power pistols in 9 x 19mm, 22 LR carbines and the FMK3 9 x 19mm submachine gun.
Interestingly, Pablo Ricchieri was the true lead in Argentina's ironworks.  He created the Fabrica de Artilleria y Aceros de Puerto Borghi ("Artillery and Steel Factory of Puerto Borghi") which allowed for the creation and refinement of steel for national and military use.

Argentina utilized 2 water-cooler sistem machine guns, the  Maxim (Maschinengewehr) 7.65x53mm Mauser and the commercial M1917 Browning in the same caliber, recoil operated automatic action.  The Maxim M1898 (recoil operated, gas boost) was manufactured by Simpson & Co in caliber 7.65mm Mauser.  The Maxim was adaptable for most cartridge designs so it was easily chambered for the 7.65mm Mauser.  Also known as the "7.65 Argentine", the 7.65 x 53mm cartidge is suitable for military use though not very common.  The Maxim M1898 was used from 1898 until the 1920s before it was replaced by lighter machine guns.

The Colt-Browning had a calibre 30-06 Springfield, 7.62x63mm in metric notation.  Argentina bought a number of these modified arms in Mauser caliber and referred to them as M28 for the year that Colt manufactured them.  The Browning machine gun has a cyclic rate of 400-550 rounds per minute.  The maximum effective range is 2,500 yards but has a usable range of 4,000 yards.  The gun itself weighs 30 pounds but adds another 6.5 with a filled water jacket.

References: Guns.wikia.com
A submachine gun (SMG) is an automatic carbine, designed to fire pistol cartridges. It combines the automatic fire of a machine gun with the cartridge of a pistol. An assault rifle, in contrast, uses an intermediate-power cartridge with more power than a pistol but less than a standard rifle or battle rifle. (Wikipedia)

Infantry soldiers from the Patricios Regiment with the submachine gun Halcon 9mm Mod 49 EA (Army). Argentina produced a number of models of submachine comparable with the Thompson submachinegun like the ML43 45 ACP blowback Action for National Gendarmerie in the 40's. In 1949 Argentina developed a version that had a curved magazine in cal 9mm Luger/Parabellum for the Army. The ML46 model was known as the Aeronautic Model.  In the 1950s they continued developing more models.

Source: The Illustrated Encyclopedia of Pistols, Revolvers and Submachine Guns
by Will Fowler, Anthony North and Charles Stronge.
world.guns.ru

Image above, courtesy of Michael Heidler. 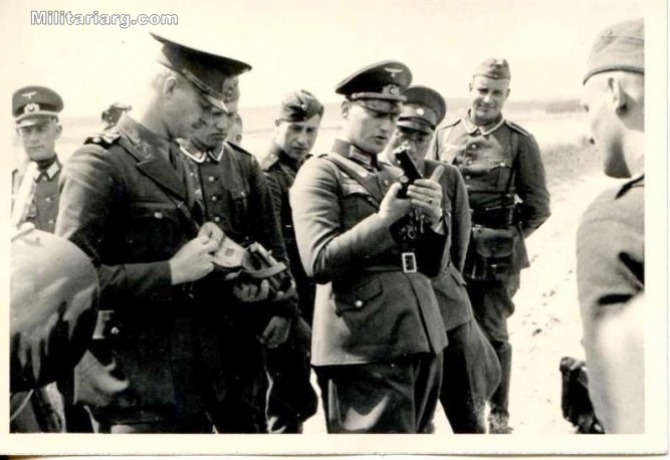 Interesting photo acquired online from Germany.  It shows an Argentine officer perhaps taking a course in Europe.  He happens to find himself in the Third Reich pre-WWII.  The German officer has a 45 ACP caliber pistol M27
(Colt 1911a1) or a DGME 1938 HAFDASA type Colt M1911A1 (Ballester-Rigaud), made in Argentina under Colt license.  There are reps from several countries at the course, including an Asian officer behind the German with the pistol.  The Argentine officer is removing a magazine from a holster.

Target practice with Ballester Molina 45 caliber ACP recoil operated, blowback pistols, also known as Ballester Rigaud or HAFDASA (from the initials Hispano Argentina Frabrica de Automoviles Sociedad Anonima).  It was basically a copy of the Colt M1911A1, a cheaper alternative to the Colt M1927 which was made in Argentina under license and was also in use in the country.  During the second world wat HAFDASA made a large quantity of these pistols for the allied countries, especially England.  So the Argentine armed forces could have pistols marked Colt caliber 45 M1927 together with HAFDASA or Ballester-Rigaud, depending on the year of manufacturing, in service.  The first Colt adopted the US was the model 1916 (Colt 1911) when an order of 1,000 arrived.  A second order of 10,000 was interrupted by the war.  In 1926 an order for 10,000 Colt 1911A1 (Colt model 1927) was made along with 926 Colt 1917 machine guns (Colt machine gun model 1928).

The Argentine Mauser (Model 1891) was used by the Argentine government from 1891 until 1909.  This model has a straight bolt handle that must be altered if a scope is mounted and a 2-position safety.  It is designed to be loaded from the top with five-round charger clips but can also be single loaded. This rifle is no longer in production and some parts are not available. The Argentine Mauser was initially made on contract by Ludwig Loewe and Company of Berlin.  It was introduced to Argentina by then-Major Pablo Ricchieri.

Photo: Never before seen photo, at least for me, of then General de Brigada Juan Peron in the Tiro Federal Argentino de Buenos Aires (Shooting Club)  with an Argentine Model Mauser 1909.  The photo was taken by my friend Enrique "Yatagan", in the Mueso de San Vicente (it was the country home of General Peron).  The old wooden support for the rifle, is still in existence.

The Browning M1919 is basically the Browning M1917 but with an air-cooled barrel instead of a water tank cooler.  The photo on the above right is of students who went to an exposition in the 1970s.  The 2 girls on the far right are looking at a Colt 30 caliber which probably were brought along with the Sherman firefly tanks.  The helmet in the photo on the above left is a replica of an Argentine helmet in olive green.

In a project to acquire an old US6 Truck and a Jeep for a reenactment group, we have this M2 .50 caliber machine gun. This model is constructed of plastic, metal and wood from original Browning blueprints. This model has the blaze orange safety tip per federal regulation.  It's a great replica.  The truck will be painted in Argentina's colors and, since it is so difficult to find replacement parts, will probably be left as a display.
This is a heavy machine gun designed by John Browning almost at the end of the first world war.  It is also known as Ma Deuce and Fifty-cal.  This machine gun has been used in diverse roles such as infantry support weapon, mounted in vehicles, anti-aircraft, naval, aircraft, etc in numerous countries.  It has participated during the 20th century in its wars (WWI, WWII, Korea, Vietnam, Malvinas and the Gulf War.  In Argentina it is known as the (12.7mm) 12.7x99mm Browning M2 HB machine gun.  According to Enzo Coria, Argentine veteran of the Marine Infantry and operator of this gun in the Malvinas War, the 12.7 had between 1000 and 1500 meters of effectivity, 1800 meters of maximum range (2200 yards).  The rate of fire is between 450 and 500 shots per minute.

Different looks at the M2 .50 caliber machine gun.  It is a great model for display and replicas of military vehicles, especially Jeeps.

Above are replica percussion or flintlock rifle and pistol from the 18th century, Brown Bess.  The rifle is a British style 1, 93mm diameter caliber . The ammo puch from the first photo is Spanish style M1792, 16mm.  These are often used in reenactments of the British invasions in Buenos Aires between 1806-1807.  Due to these invasions, many elite regiments and unities were formed which later became the Argentine military.  The invasions were during the Napoleonic period when Buenos Aires and its territories were ruled by an English viceroy, William Carr Beresford. He ruled until Santiago de Liniers, a French officer in Spanish service, defeated him and became the viceroy himself. These rifles that remained after the British invasion were used by the Argentines forces for a long time, along with the standard Spanish Rifle 1.75mm.

Beautiful resin replica of the STG44.  Argentina manufactured some units at the end of the 1940s in a 7.92mm caliber Kurz to replace the Mauser, however that initiative did not prosper.

The FAL FSL is an excellent semi-automatic weapon that has been made in the millions and sent to armed forces in over 100 countries.  It is composed of high quality materials which correspond to international norms.  It has a high precision, resistant barrel that is tested for overpressure to ensure a long life.  The bolt is made of specially treated steel for longer service.

Interesting photo of hussars rifles from the 10th Armored Regiment.  You can see the 2 leather ammo pouches.  Each pouch has 2 magazines, each magazine has 20 rounds.  Each soldier carried 80 rounds on their belt plus 20 in the rifle itself.

The Bataan M71 is a pump-action shotgun made for the military and police use made by Marcatti Industry. This shotgun was a copy of the Ithaca 37 12.70mm with some differences. The length of the cannon varied within 315 to 615mm. The 5 cartridges are placed at the bottom. Also Argentina used the Ithaca 37 among others.
FM Browning 2000

Argentine soldiers during Malvinas War with Mag 58 FN Type-60.20  caliber 7,62mm NATO. FN became the world's principle arms maker after WWII causing the MAG 58 to become ubiguitous.  Argentina replaced the 7.65mm Mauser cartridge in rifle and machine guns with the 7.62mm NATO after the adoption of the FAL and MAG 58.  Argentina adopted the MAG 58 in 1960 and it is still in use today.  Observe the version of the dubon-parka IDF Zahal that protected them from the cold.  Photo is from the magazine "La Semana" from 4/29/1982.

Left: RM Commando with 7.62mm L1A1 SLR and IWS (Indiviudal Weapon Sight), L2A1 SUIT (Sight Unit, Infantry Trilux). Left: Argentine Corporal with standard 7,62mm FAL and Tempex webbing (Correaje). This photo is very important because it shows the method of changing the ammo.  One set was taped backwards to another so that when the first ran out, the second could be put in right away.  It doubled the cartridges to 40.  This was a tactic employed by the special forces.  In terms of infantry weapons, the British and Argentines were basically equals, with Argentina mainly lacking the quantity of sights.